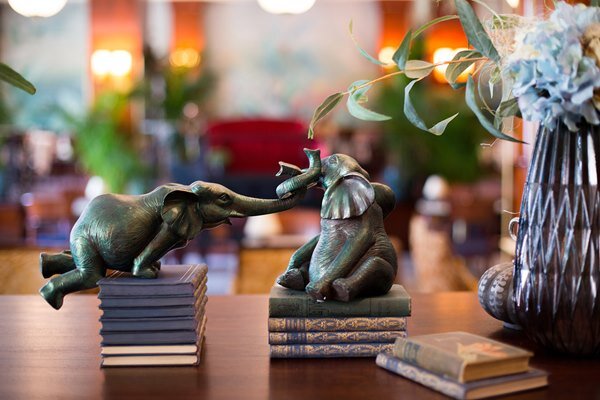 The iconic, over 127-year-old Gundel and its sister restaurant Bagolyvár are now under the management of the Eventrend Group. As the group management declared after the transfer in May: ”This is a once-in-a-lifetime moment for us! We are really proud to maintain the values and continue the tradition of this essential part of the Budapest experience. Ushering this new member into our family is an uplifting experience, but at the same time, it’s a huge responsibility. After all, Gundel is a national treasure and a world famous family brand. Over 25 years experience in catering and event management, our expertise and the enthusiasm of our team will enable us to maintain this reputation and enhance it to the best of our ability. Our goal is to make the Gundel experience accessible not just to a privileged few, but to everyone.” - (Eventrend Group) 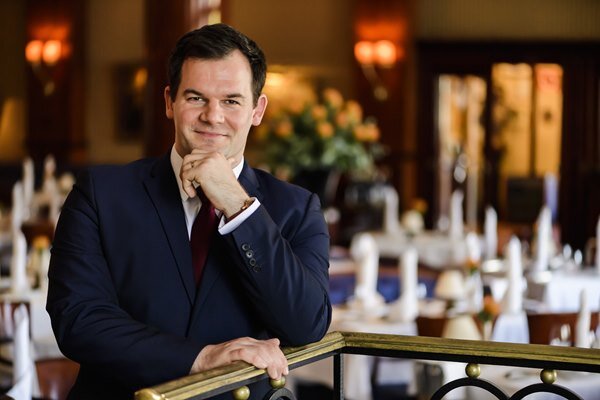 Norbert Polyák returned from London to his hometown of Budapest to take over as managing director of the legendary restaurant. During his career, he has held managing director positions at various gastronomy companies in London. This includes running the Paramount, once the most elegant members only club in central London. Norbert has spent most of his career in England, working his way up through the ranks of the hospitality industry. An experienced and dynamic professional, he saw huge potential in reinventing Gundel for the 21st century.

”Our mission is to ensure that Gundel, a legendary part of Hungary’s culinary heritage, continues to play a defining role in our country’s gastronomy. We are working on rejuvenating the over 125-year-old symbolic Hungarian brand, which will reinvent Gundel for the 21st century while maintaining its traditions.”- Norbert Polyák 01.02.2020 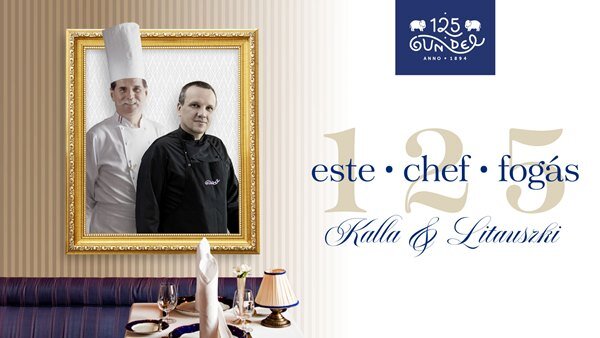 The 125th anniversary year at Gundel has been launched with the Legendary Chefs’ Menu.

Kálmán Kalla movingly describes what a special feeling it was to return to Gundel for an evening. - ”It was an uplifting experience to talk about my time at Gundel.” I was so pleased to be able to come back…”

On 21 May 2019, Chef Kálmán Kalla returned to Gundel to compose an unforgettable dinner, together with Executive Chef Zsolt Litauszki. That evening we were able to taste some of Kálmán Kalla’s own creations, which are still very successful today, along with complementary soup and main courses created by Gundel chef Zsolt Litauski (anyone who has been following the evolution of Hungarian gastronomy needs no introduction to this inventive, talented and ambitious professional). Between 2018 and 2020, it was he who combined Gundel tradition with innovation. 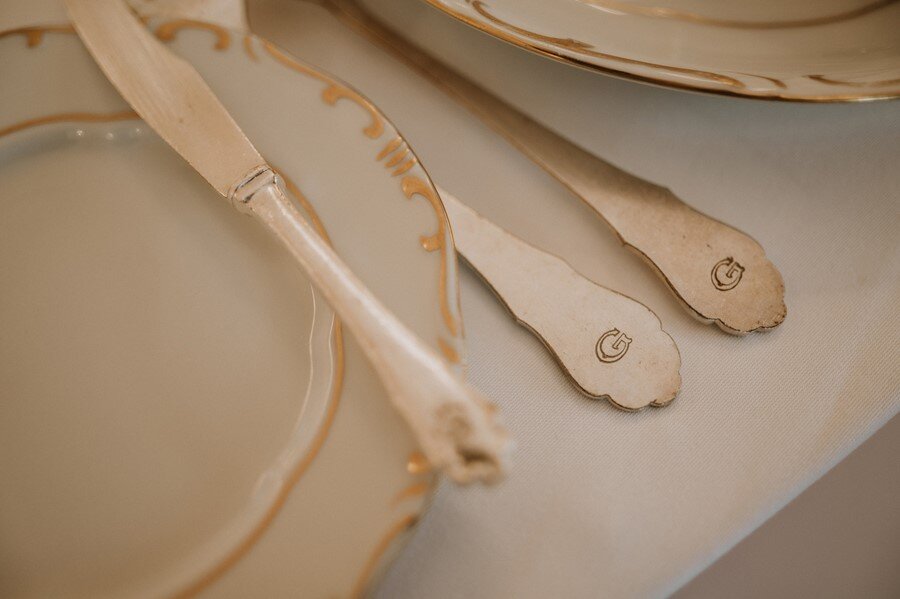 In 2004, after long negotiations, the Americans finally sold Gundel to CP Holdings, owned by the English Schreier family, so the restaurant became connected to the Danubius hotel chain. In 2014, on the 120th anniversary of the restaurant’s founding, Károly Gundel’s culinary heritage was included in the Collection of Hungarikums. Additionally, the restaurant appeared in the Michelin Guide every year between 2008 and 2016 with a 4-spoon-and-fork rating (comfort and quality – luxury standard). The restaurant managed several hundred events every year, was the venue for international conferences and provided catering services for historical venues in Budapest and across Hungary. It was known for comprehensive hospitality services – with Gundel quality. 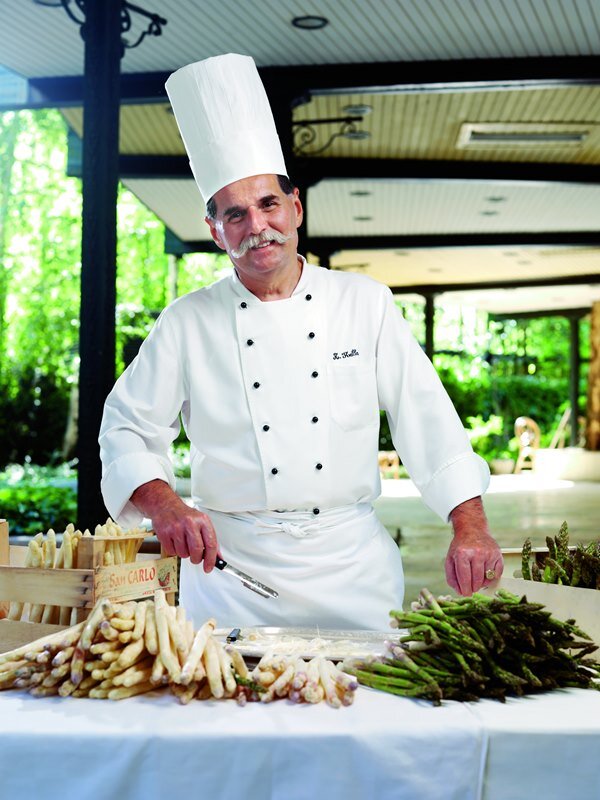 Gundel was bought in September 1991 and closed its doors in the November. A total of $23 million was spent on the building – a global level investment at the time. From when it reopened in 1992, visitors from North American flew across the Atlantic specifically to visit Gundel. The key personality during this successful period was the outstanding chef Kálmán Kalla. He was tempted by Mr Láng into returning to Hungary – having previously been in Washington DC, as chef to the Hungarian ambassador of the time, Péter Zwack. Kálmán Kalla very carefully began adapting the old recipes. He updated the menu and added his own creations to it. And what was the result? This: ”Gundel is among the world’s top ten restaurants,” wrote Condé Nast Traveller in 2006. Chef Kálmán Kalla became an emblematic figure in Gundel’s renaissance following the change of political system in Hungary. He spent 15 illustrious years at the restaurant and cooked for several hundred famous and respected personalities, such as Queen Elizabeth II and Pope John Paul II. The Gundel restaurant welcomed its one millionth guest in the year 2000. 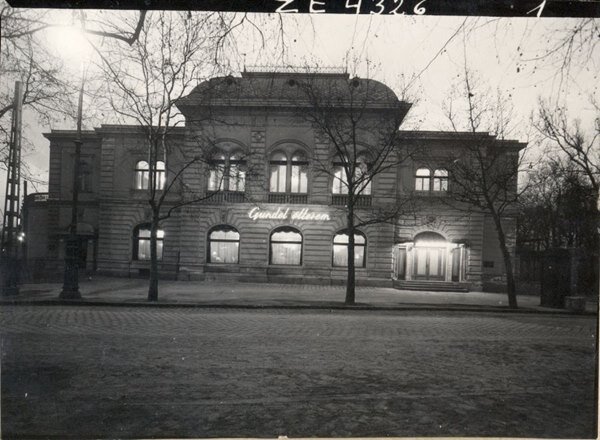 The restaurant reopened in 1980 – but with very poor renovation results. However, six years later an energetic gentlemen appeared on the scene: György Láng, who had left Hungary in 1947 and became a world-famous restaurateur in New York. He wanted to see everything. He asked questions; he took notes. Six months passed and he was back in Budapest, a book tucked under his arm, entitled: “Gundel’s next 50 years”. Mr Láng was friends with Ronald Lauder – one of the heirs and directors of the Esteé Lauder empire, an art collector, former ambassador in Vienna – and Ronald Lauder financed his dream. Success was in the air... 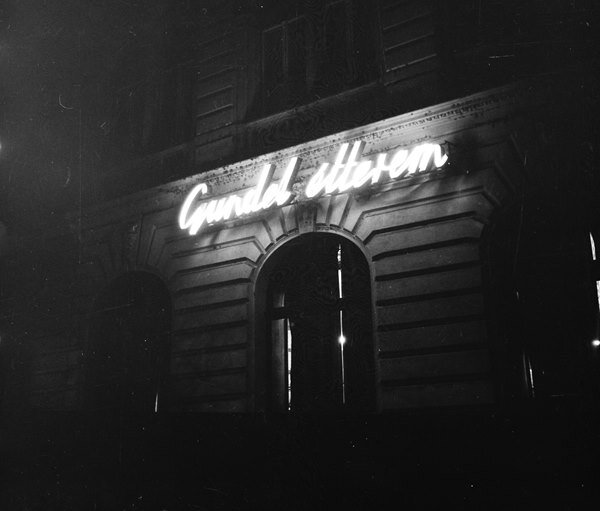 In 1949, the restaurant was privatised. The family was turned out of the building and were even exiled to a farm in 1951 because of their German heritage. The restaurant was managed by various hotel companies; in 1949 it became part of the Országos Idegenforgalmi Szálloda és Éttermi Vállalat state holding, and later part of HungarHotels. Before the change of political system in Hungary, it became part of Fórum Hotel. Unfortunately, during the Communist era Gundel saw some dark days. Finally, it was closed in 1973 and efforts were made to bring it up to the standards of the time. It took seven years for the restaurant to reopen and when it did, it rather resembled an East German canteen. 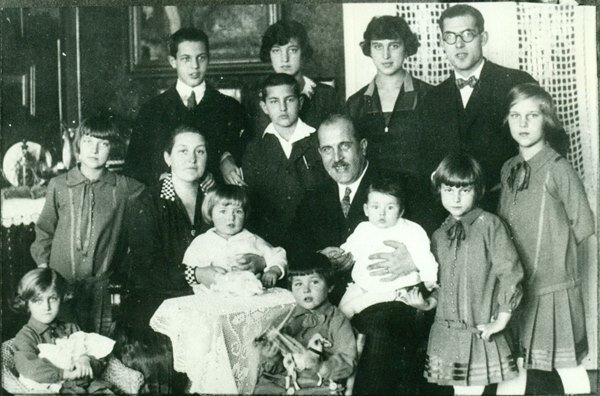 For Károly Gundel, the only thing dearer to his heart than hospitality was his adored family. He had thirteen children and twenty-six grandchildren. His recipe for life is worth sharing: ”Cook the chosen medium (person) till soft, and love them with all the spice you can possibly muster. Peel yourself to remove layers of selfishness and rough edges, then discard them. Devote all your energy and attention to your family. Don’t seek to season your life with anything more than what is offered by your work and your family; don’t always want to be right about everything. The best binding agents are children. The more the merrier. They improve life’s flavour…” Károly Gundel passed away shortly after the 1956 Hungarian Uprising, on 28 November of the same year, at the age of 73. 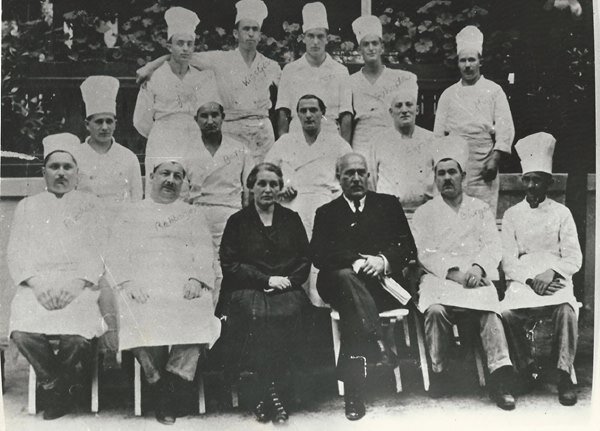 Gundel was thriving – so much so in fact that it took over the restaurant at the new Gellért Hotel as well. Hungarian cuisine of the time was a dull, greasy, paprika encrusted horror, which the wider world had no interest in. A passionate professional, he decided to create French dishes using the best Hungarian ingredients. Károly Gundel never cooked, never even picked up a wooden spoon – but he was a master of tasting. He made lightly steamed spinach respectable and introduced asparagus as a side dish. During this period, the Gellért Hotel was the birthplace of three of Károly Gundel’s famous dishes: Rothermere pike-perch, Bakony mushroom and Pittsburg veal ribs. The Gundel survived not only the two world wars intact but also the demise of the Stefánia Promenade, the disappearance of coachmen and hansom cabs and the birth of the motor car, but there was no escape from privatisation under Communism in 1949. 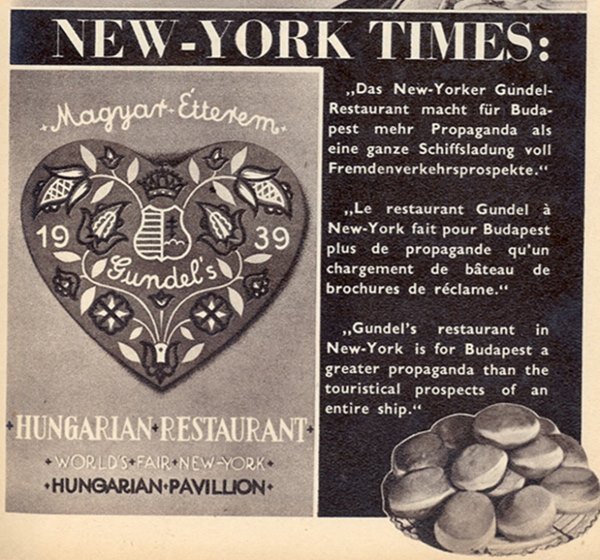 In 1939, the young Károly Gundel’s restaurant became the official restaurant of the Hungarian pavilion of the World Exhibition in New York. ”The Gundel restaurant is bigger and better publicity for Budapest than a boatload of tourist brochures,”– wrote the New York Times in 1939.

Gundel did a tremendous amount to popularise Hungary’s culinary treasures. Thanks to his beneficial influence, Hungarian cuisine was placed firmly on the map.

The restaurant’s popularity was thanks to two things: its inimitable hospitality and its incomparable cuisine. In the first decades of the 20th century, with unerring instinct, Károly Gundel revolutionised Hungarian cuisine and its previously unrealised potential, using modern kitchen equipment and combining its original flavours with the delicacies of French cuisine. He left an indelible mark on Hungarian gastronomy with his popular dishes, which are still part of the Gundel repertoire today. These include the Újház chicken soup, Palóc-style soup, the Wampetics dumpling and the deservedly famous Gundel pancake. 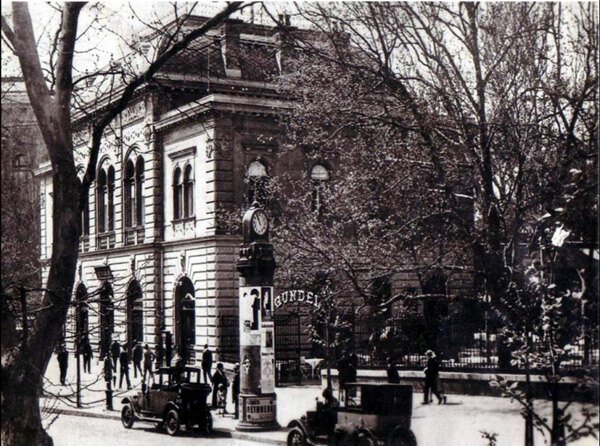 Gundel – birth of a legend

Károly Gundel leased the Wampetics restaurant from the City of Budapest in 1910, renaming it Gundel Restaurant. ”Splendid pavilion-type covered structures are situated in the large courtyard and garden, which as well as providing pleasant coolness in the summer heat, create open space in the open air.”- wrote the Vendéglősök Lapja hospitality trade magazine on 20 June 1911.

He set about his work with gusto: modernising the menu and reforming the service as well as the whole system in the kitchen. And he enjoyed resounding success! Károly Gundel tamed Hungarian cooking, combining it with culinary trends from around the world and making gastronomic history with his dishes. For Hungarians, the name Gundel soon became synonymous with true hospitality and the restaurant became a favoured meeting place for Hungarian politicians, business leaders and the middle classes. ”It was chic to go to Gundel...” was the opinion of the artists, sports people, writers and other well-known figures, as well as the restaurant’s regulars. 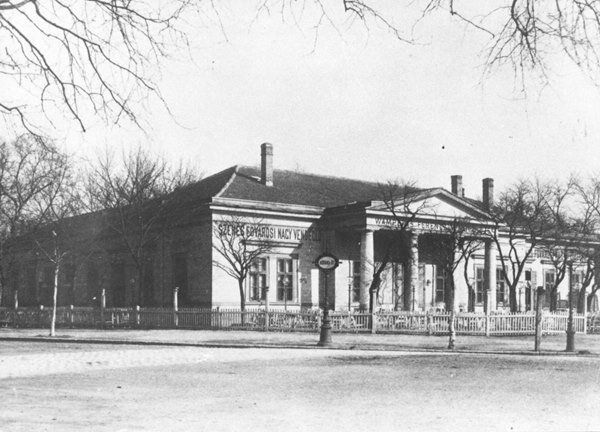 Wampetics thought the location had great potential so he financed building conversion work at his own expense. The work was carried out based on plans by Ervin Bauer and finished in less than a year, with the restaurant opening its doors in 1894. The Wampetics name soon became well-known; the restaurant was even mentioned in a very popular song from Budapest’s Ofeum cabaret. It became a well-known haunt of politicians and artists, with literary, political and artistic groups meeting there regularly. In the words of the guests: ”Anyone who is anyone books a table here...” 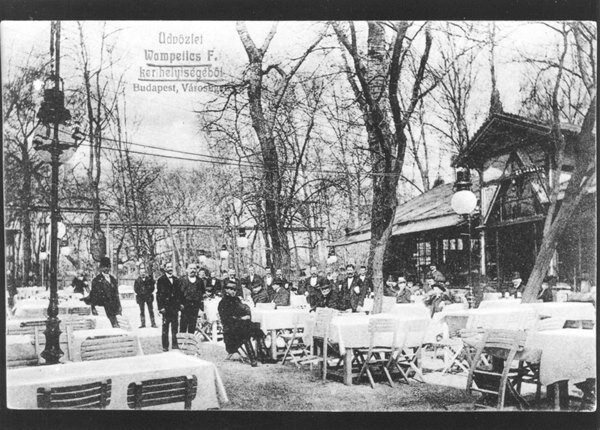 The restaurant opened in 1866 next to the Budapest Zoo, where the restaurant is today. The City Park was becoming more beautiful all the time and the zoo was slowly being developed. Originally, there were plans for an indoor restaurant for visitors to the park and the zoo and finally the predecessor of the building we know today was erected. In the 1800s, the Budapest City Park was one of the most popular places for recreation and walking for a broad range of social classes. And naturally the hustle and bustle involved eating and drinking too. The first hospitality business here was started in 1810 by Leopold Grossinger, who was licensed to sell wine and there were tenant business people too, the first being Klemensz, followed by others whose names have now been forgotten. Next came Wampetics and Gundel, marking the upswing of Hungarian hospitality in the Budapest City Park.